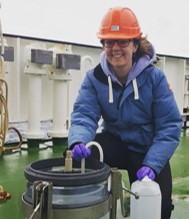 Chelsey is a biogeochemical data and model analyst in the Marine Systems Modelling group at the National Oceanography Centre, Southampton, working on the CLASS project which aims to improve our understanding of the North Atlantic Ocean in a changing climate using observations and models. Chelsey’s research interests are focused around the functioning and efficiency of the biological carbon pump, with a focus on carbon export and particle fluxes, and wider implications for the global carbon cycle.

Chelsey graduated with a BSc in Ocean Sciences from Bangor University (2014) and went on to study for an MSc in Oceanography at the University of Southampton (2015). Chelsey then completed her PhD at the University of Southampton (2019) on the topic of deep ocean carbon storage in the Subpolar North Atlantic and also undertook a research placement to Woods Hole Oceanographic Institution during this time. She participated in several research cruises collecting biogeochemical samples during her PhD and to date has spent over 120 days at sea on research cruises throughout the Atlantic Ocean.